From SpongeBob Edits Wiki
Jump to navigation Jump to search 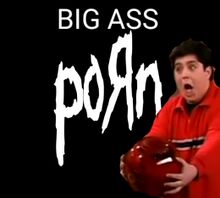 MovieEdits was a user who made several edits, mostly of movies as his name suggested. He made his last video in December 2011 and has not updated since.

The Bet Edited and references to it[edit]

His most famous edit, incidentally, was their only one NOT of a movie: of "The Bet" from Drake and Josh, a collab with fellow editor SpongyPantsEditor (whose work he frequently featured on his channel) and his last edit before shutting down shop. It has become a bit of a minor internet meme, especially around the "dank" corners of modern YouTube Poop, due to being slopply edited and nonsensical but still funny and quotable, and the fact that D&J itself is somewhat of a popular source in the "dank" meme areas of the internet.

It is quite often referenced and YTPed the same way you'd do with an unedited movie or show, practically becoming an entity on it's own. By far the most referenced bits from it are the line "BOOBS? Not fo'h me! I'm just gonna eat me a big ol' bag of FUCKING DICK!", and moments after when Josh attempts to remove cheese balls residue with a vacuum with a looping sound going "SUCK. SUCK. SUCK. SUCK. SUCK."

EmpLemon, a universally beloved YouTube Pooper and the second-most subbed one to date, started referencing this edit in July of 2016. Almost every video he made after that, big and small, YTP and non-YTP, contained some sort of reference to it:

The collab itself surprisingly contained little references to the edit, with only three:

Another very popular YouTube Pooper, a fellow editor, and the unofficial "apprentice" to EmpLemon, Goop Videos, has done his fair share of "The Bet" references too:

Despite the immense popularity of their video MovieEdits himself never became a household name. He had made many other equally sloppy and weird edits in the past but despite them all being over five years old only two have even broken 1,000 (those being his two Shrek edits, the second of the three on his channel is actually SpongyEditor's). His most viewed edit besides The Bet (which ranked in the hundred thousands) is the first Shrek edit with a measly 2,000. His most viewed non-Bet video isn't even an edit but rather Beavis and Butthead headbanging to Dethklok's "Hatredcopter" for three minutes, which has 12,000.

Some of their edits weren't even actual edits in the EDITED sence but rather agressively mediocre YouTube Poops. Here is a list and links for all their edits, with the ones in the "mediocre YTP" catagory in bold.

Retrieved from "https://spongebobedits.miraheze.org/w/index.php?title=MovieEdits&oldid=665"
Category:
Cookies help us deliver our services. By using our services, you agree to our use of cookies.